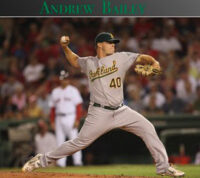 Andrew Bailey, born in Voorhees Township, NJ, is a former major league pitcher who played for the Athletics, Red Sox, Yankees, Phillies and Angels. He played college baseball for Wagner College on Staten Island and was selected by Oakland in the sixth round (188th overall) of the 2006 Major League Baseball draft. Prior to college, Andrew played at Paul VI High School under Tony Mitchell and for Mike DeCastro in the Haddon Heights American Legion program.

He made the Athletics Opening Day 25-man roster for the 2009 season as a long shot, and made his major league debut on April 6, 2009, tossing a scoreless inning against the Los Angeles Angels of Anaheim. Bailey was selected to represent the A’s in the 2009 MLB All-Star Game in St. Louis and capped off the season being names American League Rookie of the Year.

He broke the Athletics rookie save record on September 12 against the Minnesota Twins with his 24th save of the season. After a final line of 26 saves (9th in the AL) and a 1.84 ERA, Bailey was named 2009 American League Rookie of the Year.

In 2014, he signed a minor league contract with the Yankees and made it to the majors

Lifetime, he was 16-14 with a 3.12 ERA, 276 strike outs and 95 saves. Bailey and his wife Amanda have three children. He is active in Major League Baseball through the 2022 season serving as the San Francisco Giants pitching coach. 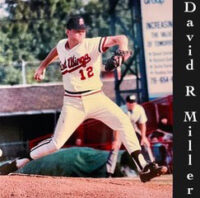 David R. Miller, a Blackwood, NJ native, was a three-time MLB draftee – by the Pirates in January 1985, Tigers in June ’85 and Orioles, ’86. He was a pitcher and infielder at Highland High School where he was named All-Conference and All-South Jersey in 1984. In his senior year, his many extra-base hits included five home runs and a .425 batting average to add to his 5-0 pitching record.

During the summers of 1984 and 85, Miller took his bat and glove to American Legion Post 281 in Blackwood and to Camden County College in 1985 and ’86. In ’86, he was named to the Junior College All-America team as a right-handed pitcher.

Among Miller’s professional accomplishments are pitching for the Bluefield Orioles in the Rookie League and Erie in the Short-Season Class A New York-Penn League, where he posted an 8-3 record with a 1.37 ERA and being named an All-Star. In 1989, he pitched for the Single-A Frederick Keys in the Carolina League, moved up to the Hagerstown Suns in the Eastern League (Double-A) and closed out his professional playing career with the Triple-A Rochester Red Wings in 1992.

Miller started his pitching coach career in 1993 with the Burlington Indians (Rookie Ball) moving onto the Watertown Indians (Short-Season A), Kingston Indians (Single-A), and Bullpen coach for the Cleveland Indians in 2012. Since, he has remained with the Indians/Guardians, serving as an amateur scout, pitching coordinator, advance scout and currently (since 2017) special assignment scout.

Miller and his wife Theresa have three children and live in Wilmington N.C. 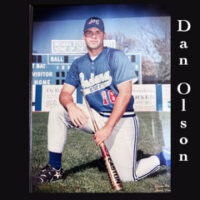 Dan Olson of Cape May, was a 1996 Chicago White Sox draftee after graduating from Indiana State University (ISU) in 1996, where he achieved some impressive offensive numbers, but nothing like his years at Lower Cape May Regional High School.

Playing outfield and first base from 1990 to 93 at Lower Cape May, he batted .421 with 121 total hits including 69 for extra bases. He was always a threat as evidenced by his 28 home runs. He was All-Conference three times and All-South Jersey and All-State twice. While at ISU, he was All-Missouri Valley Conference in 1994, 95 and 96. In ’94, Olson was a freshman All-American, in ’96 a Second Team All-American and invited to the U.S. Olympic trials.

His summer baseball accomplishments include being named a Cape Cod League All-Star twice and winning its Home Run Derby in ’95. In the White Sox organization, he spent three years playing for the Hickory Crawdads (Single-A) in the South Atlantic (Sally) League and Winston-Salem in the Single-A Carolina League being named an All-Star. He moved up to the high level Double-A Southern League Birmingham Barons in 1998 making the All-Star team and winning the Home Run Derby that year, too. Olson’s last year in professional baseball was 1999 with Winston-Salem when he batted .319. 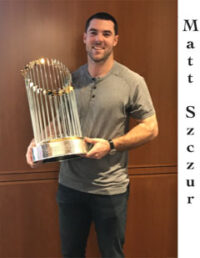 Matthew Szczur of Cape May, made his MLB debut with the Cubs in 2014 and also played for the Padres. Prior to his professional baseball career, he played football and baseball at Villanova University, winning Most Valuable Player (MVP) of the 2009 FCS (Football Championship Subdivision) National Championship Game. He caught scouts’ eyes long before that at Lower Cape May Regional High, where he graduated in 2007 and was drafted out of high school by the Dodgers in the 38th round, but decided to attend Villanova instead.

In high school, Szczur earned varsity letters in football, baseball and track and field. While he batted .355 as a high school freshman (2004), he improved to .510 as a sophomore, dropped to .471 his junior year and caught the eyes of pro scouts and college recruiters when he batted .681 as a senior. Add to those numbers 33 extra-base hits including 22 home runs, 114 runs batted in.

Among his accolades are being named All-Group 3, All-South Jersey and All-State multiple times at Lower Cape May Regional. At Villanova, his career batting average was .392 (fifth all time at the time). He was All-American, All-Big East and Big Five Player of the Year. Szczur signed a contract with the Cubs’ organization, which drafted him in the fifth-round of the 2010 MLB draft. He was assigned to the team’s short season Class-A team, the Boise Hawks, where his offensive numbers and fielding were so good that three weeks later he was promoted to the Cubs’ mid-A team, the Peoria Chiefs. He hit .347 in 25 games in 2010. He progressed through the minors and got the call to join the “Bigs” on August 16, 2014.

On a personal note, according to Wikipedia, while at Villanova, he donated bone marrow to a 15-month-old Ukrainian girl named Anastasia battling leukemia – essentially saving the girl’s life given the severity of her condition and how hard it would have been to find another person who was a match for her bone marrow. He met the healthy 4-year-old girl and her parents via Skype using a translator who was present at Anastasia’s house and documented in an ESPN special. Szczur and his wife, Natalie, have a son. 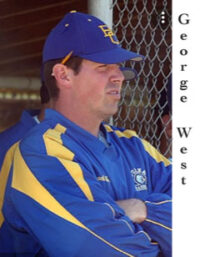 George E. West III of Atco, enters the Hall of Fame as a player and a coach. He played his baseball at Buena High School where he also was head coach for 10 years, compiling a 196-83 record and winning South Jersey Group 2 titles in 2008 and 2012. Buena was the 2011 Joe Hartmann Diamond Classic champion and West was named South Jersey Coach of the Year, which he also won in 2008. His Chiefs took home Cape-Atlantic League championships in 2006, 2007 and 2012.

At Monmouth, he was consistently among team leaders in hits, home runs, RBIs, doubles, walks, runs and games played. He signed with the Brewers as a free agent 1998 and played for Helena in the Rookie Pioneer League. In 1999, he played for the Johnstown Johnnies in the Independent Frontier League, in 2000 and 2001 for the Atlantic City Surf in the Atlantic League and retired after the 2001 season playing for the Alexandria Aces in the Texas-Louisiana Independent League team.

West has served as Middle Township High School principal and will be taking the position of Superintendent of the Greater Egg Harbor Regional School District. He and his wife Dorene have two sons, Gavin 17 and Trevor 12. 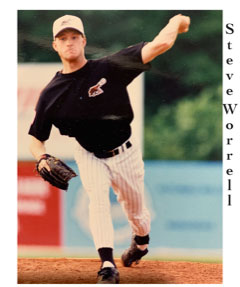 Steve Worrell, now of Orlando, Florida, is a 1988 Lower Cape May Regional High School and a 1992 Stanford University graduate. He was named a High School All-American his senior year, All-State All-South Jersey and All-Group 2 his junior and senior years and All-Cape-Atlantic League in 1986, ’87 and ‘88.

Worrell, a hard-throwing pitcher, was among South Jersey’s top hitters in high school, batting .344 as a sophomore, .329 his junior year and .373 as a senior. Over those three years, he had 32 RBIs to along go with his 15 extra-base hits, including two home runs.

Later in 1996, he was promoted to the Nashville Sounds and retired from professional

baseball in 1998 after playing for the Iowa Cubs. 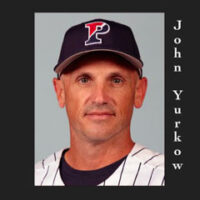 John Yurkow of Sewell, played his high school baseball at Gloucester Catholic under Hall of Fame coaches Al Radano (1997) and Dennis Barth (2017). He took his high school talents to Rowan University where he was a second baseman under head coaches Juan Ranero and John Cole playing a strong defense and setting offensive records that still stand. He is a 1999 Rowan graduate.

For the past six years, Yurkow has been Penn’s head coach. His accomplishments there include third all-time in coaching wins with 169, third-fastest to 100 wins (152 games). He has a 53.5 percent over-all win-loss record and a 63.3 percent Ivy League W-L record – five times winning at least 60 percent of his Ivy League Conference games, five 20-plus win seasons, coaching 53 All-Ivy League players including 25 First-team selections and 16 Second-Team selections. He has coached nine Quakers selected in the MLB Draft – most recently the 2022 11th round Tigers’ pick, Joe Miller and, in 2022, coaching Penn to a record 33 wins.