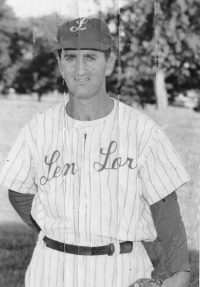 Chuck was a three-sport athlete in 1942-43 under ‘Worm’ Wershing at Woodrow Wilson HS. He was an All Group 3 catcher both years hitting .360 and .405. After the 1943 season he joined General George Patton’s 3rd Army where he received four battle stars.

After discharge, he signed with the Philadelphia Athletics. He was optioned to the Chicago Cubs where he played for the Welch, WV team in the Appalachian League. He was hitting .406 when he broke his ankle and spent the rest of the season recuperating. He was off to another great start in 1947 when he learned that his first child was on the way. He then gave up a pro career to be close to his family.

Chuck continued to play semi-pro ball with some of the best team in South Jersey. In 1952, he led Defiance in the Aaron Twilight League and RTC in the Camden County League to titles. He won the batting title in both leagues, hitting .400 and .450 respectively. As a catcher he teamed up with some of the best pitchers in South Jersey and during his semi-pro career never hit below. 300. In 1963 he finished off his career by winning another batting title and hitting .400 with the Polish American Citizen’s Club team.

Chuck has been a member of the Hot Stovers for many years, winning the ‘Bucky’ Shinn “Hot Stover of-the-Year award in 1977, 1978 and 1984. In 1997 Chuck was awarded the ‘Hot Stovers Lifetime Achievement Award’. 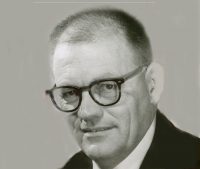 Pitching for Collingswood HS, Doug was fortunate to have played for two of the premier coaches of the era. He played for ‘Skeets’ Irvine in 1942 and for Bill Diemer in 1943. He spent the next three years in the service, returning in 1946 to attend then Rutgers-Camden. He pitched in his senior year and then went on to play eight years for Woodlynne in the Camden County League. Doug then went into coaching, spending eight years at Riverside High as Baseball Coach, and eleven as the Basketball Coach. He was named Coach-of-the Year in 1962 and 1965.

During his 50 years at the Courier Post Newspaper, Doug has reported on major sporting events at all levels. He is best known, however, for his talent in bringing alive coaches, players and events of the past. His biographical sketches have given us the ability to experience the excitement of our baseball history, while showing us the humanity of our predecessors.

Doug served on the Board of Trustees of the South Jersey Baseball Hall of Fame from 1988 until 1996.

For more than fifty years, Malloie was a familiar figure on the ballfields of South Jersey. Born in Camden in 1903 and raised in the Fairview section, he dropped out of school in the fourth grade to help support his family after the death of his father. During his youth he played baseball and basketball.

In 1929, along with five other men, Reds founded the Independent Umpires Association (IUA). Over the course of the next five decades, he was responsibility for the growth of the veracity and creditability of the organization.

Malloie served as Assignor from 1929 until 1961. During this time the membership grew from 6 to 129 umpires. He worked 3,504 ball games, covering every league or team active during this period.

Lefty Joe was a natural athlete, starring on both the diamond and on the basketball court in the late 1960s. Joe was a smooth fielding 1st baseman and pitcher and a four-year starter at Audubon HS, hitting .359 his senior year. He drew most of his attention, however, on the mound. One of his most memorable performances came in a state championship game at the expense of Mainland HS where he registered 20 strikeouts in a 1-0 victory.

Joe’s career really blossomed while playing for Brooklawn American Legion Post 72 where his blazing fastball regularly shut down opponents. He was instrumental in the team reaching the regional finals in 1969 when he limited Colonial Heights batters to one hit. During the same regional, Joe tossed a no-hitter against Northampton and a two-hitter against Delaware. Coach Joe Barth Jr. considered him one of the hardest throwers in Brooklawn Legion team history.

Joe attended Wake Forest University where he logged a 5-1 record as a freshman. He then transferred to St. Joseph’s College in Philadelphia and later that year signed a professional contract with the Pittsburgh Pirates. He recorded four strong seasons in the Bucs system before an arm injury ended his career. 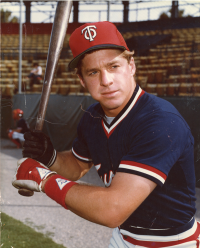 Jeff was a three-year varsity starter at Millville HS from 1977 to 1979. He was named to the All Cape-Atlantic team in 1978 and 1979 and was named to the ALL-SOUTH JERSEY team in 1979.Afer graduation, he attended the University of Delaware where he was a four-year starter, Jeff was named to the All-East Coast Conference team in 1982-83 and the East Coast Conference MVP and U. of Delaware’s Athlete-of-the-Year in 1983. He played in the Atlantic Collegiate Baseball League in 1982 where he set six records on his way to a MVP award after leading the league in hitting.

His .519 batting average was 2nd in the nation in 1983 and was named to the All-American team. When he left Delaware, he was the 4th all-time leading hitter in College D-1. Jeff became the 4th round draft pick of the Minnesota Twins in 1983 and spent four years in the Twins minor league system.

He returned to Millville HS where he coached the JV team to a 72-22-2 mark in six seasons. In six years as Varsity coach, he was 92-43, winning the Cape-Atlantic League in 1996-97. Jeff was named Coach-of-the-Year in 1997 by the South Jersey Baseball Coaches Association.