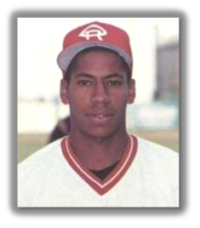 Anthony (Tony) Burley of Pennsauken is a 1978 Saint Joseph’s (Camden) High School graduate who played three years of varsity baseball and was named All-South Jersey Honorable Mention and All-Parochial in ’77 and ’78. In 1978 and ’79, he was an infielder on the Brooklawn American Legion state championship teams. In 1978, Burley batted .410 for the Bisons and in ’79 .400 for Brooklawn.

He played three years of varsity ball for the University of Iowa Hawkeyes from 1979 to ‘81before being drafted in the 14th-round in 1981 by the Pittsburgh Pirates.

Burley was named All-Big 10 in ’79. His 1981 stolen-base record of 42 on 44 attempts stood for 27 years. In 1980, he was involved in 58 double plays – a record that still stands. He was a versatile infielder in both high school and college, playing second, third and shortstop.

Among his other credits are playing for the Cincinnati Reds 1980 Instructional League champions, the Gulf Coast Pirates (Rookie League), 1981, Cedar Rapids Reds (Single-A), 1982 and the Reds Single-A Tampa Tarpons in the Florida State League in ’83. Among his teammates over the years include Eric Davis, Paul O’Neill, Tom Browning and Danny Tartabull. 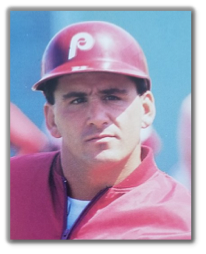 Joseph (Joe) Cipolloni Jr. of Macungie Twp, PA was a three-sport star at Washington Township (Gloucester County) High School, who went on to play seven years of professional baseball in the Pirates’ and Phillies’ organizations.

In addition to his baseball prowess as a catcher and occasional third baseman, Cipolloni also lettered in football and wrestling for the Minutemen and was named All-Olympic Conference in all three sports. He is a 1981 University of Arizona graduate and received his associate’s degree from Phoenix Junior College. He credits coach John Bush with counseling him as he moved from the Pirates to the Phillies organization.

Once there, he played for Helena (Montana) in the Rookie League, Spartanburg in the Phils’ Low A and Peninsula in High A in 1981 and ’82, respectively. He was promoted to the Double A Reading Phillies in ’83 and played for the Triple-A Portland Beavers in ’86 and ‘87. On the day he was to be promoted to the Phillies major league team, he suffered a career-ending knee injury. He was on the Phillies’ 40-man roster from 1984 to ‘86.

Nick Favatella, now of Robbinsville, NJ, is a 2010 Washington Township graduate and 2014 Rutgers University grad. When he ended his Minuteman career, he was the team’s all-time hits leader, a four-time All-Conference pick and a member of the 2007 state championship team.

He was a first-team All-State player as a senior and was named All-Group 4 twice. He went on to become a four-time letter-winner at Rutgers.

The 2010 Gloucester County Times and Courier-Post Player of the Year, as a Township senior, Favatella carried his success over to the collegiate level. After starting 35 games as a freshman and hitting .283 with 18 RBIs, he raised his game even higher to become one of Rutgers’ most dangerous hitters.

At Washington Township, from 2007 to 2010, his batting average consistently rose from .350 to .380 to .545 to .589. The four-time Rutgers’ letter-winner was All- Conference, All-American Athletic Conference and All-Northeast Region. 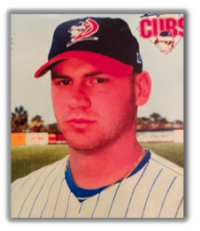 Barry Fennell of Cherry Hill, is a 1994 Holy Cross graduate, who was a fifth- round Cubs draft choice out of high school where he batted .410 his senior year and also made his mark as a pitcher.

Named All-State in 1994, he was All-South Jersey and All-Parochial A in ’93 and ’94 . He spent six seasons in the Cubs’ system advancing to Double-A ball in 1999 playing for Daytona in the Florida State League.

As a professional, he appeared in 106 games as a starter and reliever picking up 14 saves to go along with his nine victories striking out 214 batters along the way in just under 300 innings pitched.

For the past 19 years, Fennell has been with the crisis team at Burlington County Special Services.

Joe Gorski who now splits his time between Galloway, NJ and Zephyrhills, FL, graduated from Saint Joseph’s High School (Camden) in 1969 earning varsity letters in his junior and senior years playing baseball and basketball. He was named All-Parochial in his senior year and went onto Camden County College (CCC) and Seton Hall University (SHU) before graduating from Glassboro State College.

At SHU, he had a 3-0 pitching season in 1970, went 4-0 at CCC and was named to the Junior College (JUCO) All-Region team. He represented CCC and Region 19 in the Eastern JUCO All-Star game in New Castle, Pennsylvania.

He was on the roster of the Camden City League team that competed in the Bridgeton Invitational in 1971 and, after taking time to follow his children’s activities, from 1990 to 2006 his talents were on the field as a member of the South Jersey Hot Stovers’ baseball team, pitching until the age of 55.

He has served as a Babe Ruth manager and coach for the PYAA (Pennsauken Youth Athletic Association), an umpire with the Independent Umpires Association, and twice has served as Hot Stovers’ president, 1996-97 and 2020-21.

Joe had a 48-year career in the Medical Information business in Distribution, Sales and Sales Management, traveling throughout the United Sates and most of Canada before retiring in 2018. 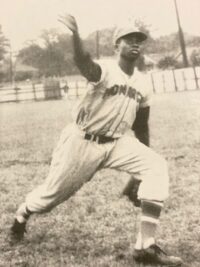 A.J. Jackson, now 85 years old, lettered in baseball and basketball at Burlington City High School. He may best be known for playing in the Rancocas Valley League and then becoming a successful coach in the 1950’s. Although official statistics are not available, it is known he pitched a number of no-hitters and played almost every position when not pitching.

Upon graduating from high school, he played in Negro baseball leagues before signing with the Cleveland Indians in 1948 becoming a minor league teammate of Cooperstown Hall of Famer Satchel Paige. In those days, African American teams barnstormed the United States and into South America, which led to Jackson playing for the Republic of Colombia, South America and being named to the Negro League Baseball All-Star team. He was a contemporary of Dodgers’ pitcher Don Newcombe when their team traveled to Japan to play against Japanese all-Star teams. 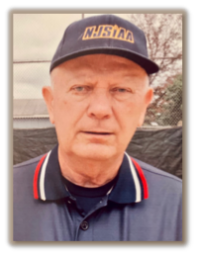 Veteran umpire Bob Mitchell of Blackwood, a 1966 graduate of St. Joseph’s HS-Camden, is being recognized for his contributions to the game for 53 years – first umpiring in 1968 in the Camden County Slow Pitch League.

In 1976, he joined the Independent Umpires Association (IUA) and began his high school baseball and softball officiating career. During his time with the IUA, he has served as president, rules interpreter, state representative, cadet instructor and assignor, which he continues to do to this day.

In 2018, he was named by the National Federation of High Schools as the New Jersey Baseball Official of the Year.

Mitchell continues umpiring with the newly formed United Umpires Association of South Jersey assuming a leadership role with that group. He has been involved with Babe Ruth baseball as an assistant state commissioner (1979-2001) and has handled many district and state tournaments in South Jersey.

His 20-year high school basketball officiating career with IAABO Board #34, ended with his retirement in 1994. He is currently involved with the South Jersey Football Officials Association, (Ed Myers Chapter) as an official clock operator. 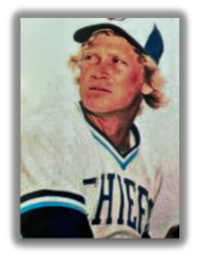 Donald J. Pisker, of Clearfield Twp, Pennsylvania graduated from Gloucester Catholic High School with his diploma plus four varsity baseball letters and one for football. In his senior year (1971), under coach Jim Carr, the Rams won the State Parochial B title.

In high school, Pisker compiled batting averages of .355 and .451, drove in 36 runs and hit more than 15 home runs. In his senior year, he led South Jersey in hits, total bases, home runs and slugging average – all using a wood bat.

He had an impressive seven-year minor league career starting in 1975 and ending in 1981. Along the way, he played in the Rookie League, Class A Midwest League (Dubuque, Iowa), Double-A Southern League (Columbus, Georgia) and Triple-A International League (Syracuse). He retired from playing in 1981 after splitting the season between the Mexican Triple-A League and playing for the Salt Lake City Gulls in the Triple-A Pacific Coast League, as a member of the California Angels organization. In 1979, the Astros considered Pisker a top prospect along with Bruce Bochy.

His post-playing career had him coaching in the Atlantic Collegiate Baseball League for the Quakertown Blazers, hitting coach at Kutztown University, co-founder with Tim Neiman of the Allentown College Baseball School, coaching baseball, football and basketball at Upper Perkiomen High School and very much involved in Little League through American Legion ball in Upper Perkiomen. He and his wife have four sons and a daughter. Son Luke was a 2007 Washington Nationals draft choice.

Paul Reagle of Magnolia, is being recognized for his contributions calling balls and strikes for 40 years. He began his professional umpiring career with the New Jersey Baseball Umpires Association in 1983 officiating high school and eventually college baseball.

His resume contains some of New Jersey’s most important ballgames – from first-round playoff games to officiating five state baseball championship games, several state All-Star games and many Diamond Classic finals. After the passing of veteran umpire Stuart Leon, Reagle assumed the role of assignor for the state baseball tournament for the southern region.

The 1975 Triton High School graduate was a three-sport athlete and started for the Olympic Conference champion football and baseball teams. Reagle was named the Mustang’s Male Athlete of the Year as a senior.

His successes followed him into his professions. In 2001, he joined the teaching staff at Sterling High in Somerdale and assisted with the baseball program through 2015 – forcing him to cut back on his high school baseball officiating. He was never far away from it though, as he became the Camden County Umpires Association rules interpreter.

He has been recognized with a number of awards including in 2013 being inducted into the Triton Regional High School Hall of Fame. In 2015, the National Federation of State High School Associations named Reagle its premier award winner – Baseball Official of the Year, “In grateful appreciation of outstanding service and unselfish devotion to interscholastic activities.”

Outside of baseball, Reagle officiates middle and high school basketball and spent 15 years (1983-98) in the advertising profession. 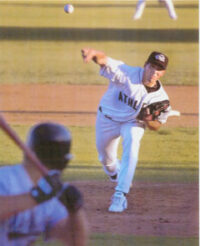 Marc Sauer of Tampa, Florida, is a 1998 Bishop Eustace Preparatory School graduate, where he was a dominating right-handed pitcher for coach Sam Tropiano. He earned All-State and All-South Jersey honors his junior and senior years and was All-Olympic Conference as sophomore, junior and senior. His 1997 Crusaders were state champions.

Marc is in his 15th year as a scout with the Oakland A’s. He is Oakland’s national scouting supervisor with a primary focus of running all of its scouting efforts on the east coast from Main to Puerto Rico.

Even though he had committed to pitch for Clemson University, he signed with the Florida Marlins who took him in the eighth-round of the 1998 Major League baseball June amateur draft.

Sauer was a known for his explosive fastball – one he parlayed into a 9-3 record as a senior that included a 1.77 ERA and 97 strikeouts in 70 innings. He set Bishop Eustace records with 27 career wins, a 12-1 record as a junior, 231 career strikeouts and 199 career innings pitched.

Add to his pitching honors mentioned above, All-Parochial, All-Conference and Carpenter Cup All-Star in 1996, ’97 and ’98.

His six-year minor league career with the Marlins and Oakland A’s started in the Gulf Coast Rookie League and took him into high Class-A ball where he compiled a 34-18 record and 3.50 ERA. After two years of Independent League ball with the Newark Bears and Joliet (Illinois) Jackhammers Sauer retired from playing the game.

Scott Young of Turnersville, was an outstanding right-handed pitcher for Washington Township High School and the University of Delaware before being drafted by the St. Louis Cardinals in the ninth round of the 1981 MLB June amateur draft.

Playing for John Bush’s Minutemen, Young went on to earn All-State, All-South Jersey, All-Group 4 and All-Olympic Conference honors. At Delaware, he set several records and was named All-East Coast Conference. His career statistics for the Blue Hens include 60 games, 30 wins, completing 27 games,7 losses, throwing 342 innings, and striking out 232, walking 163 with an ERA of 3.77.

He was a two-time minor league All-Star.