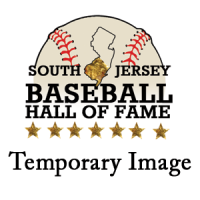 Rocky also played in some of the most competitive semi-pro leagues during the summers in 1954 and 1955. He won the hitting title in both 1954 at .407 and in 1956 at .436 playing in the Camden County League. With the Westville Club in 1957 and in 1958 with Moffa’s Farm, he played in the finals of the National Baseball Congress tournament in Kansas. Rocky was named the Most Valuable Player and also named to the NBC All-New Jersey State Team.

He signed a contract with the Brooklyn Dodgers which assigned him to Vero Beach, FL. He returned home, however, to finish out his playing career in South Jersey semi-pro leagues while continuing to menace opposing pitchers for several years. 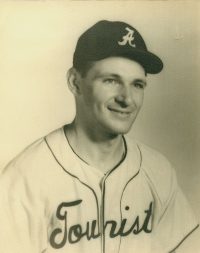 Joe’s strong right arm led HOF coach Worm Wershing’s squad to a Conference Championship in his senior year of 1941. He also teamed with Hall of Fame outfielder Norm Selby in 1940 to have a strong season as well. In 1941, Joe posted an 8-0 record while striking out 94 in 68 innings, while giving up just 11 walks. He was especially effective in the BIG games, striking out 18 against a Camden HS team that included Hall of Famer Al Litwa and 14 against Bridgeton in the conference championship game.

After graduation, Joe played for RCA in the Aaron Twilight League and for Audubon in the Camden County League. He attracted the attention of the Philadelphia Athletics who signed him to a contract for the 1942 season. However, World War II broke out and Joe joined the Navy where he was until 1948. Joe established several military service pitching records while playing for base teams during those years and even played baseball in Greenland against an Army team representing a base there.

Joe signed with the Pittsburgh Pirates after his Discharge from the Navy in 1948 and pitched with several teams in the Pirates farm system, earning All-Star honors in 1950, before retiring in 1952. 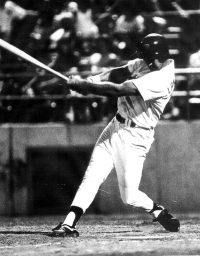 Rick graduated from ‘East’ in 1974 and enrolled at Glassboro State College where he developed his reputation as a long-ball hitter. Splitting his time between outfield and first-base, he maintained a .295 average, hitting 29 home-runs and driving in more than 100 runs during his career there.

Lancellotti was drafted in the 11th round by the Pittsburgh Pirates in 1977, he signed and was assigned to the team in Charleston, SC. He moved up to AA Buffalo, NY in 1979 and after playing winter ball in Colombia South America worked his way up to AAA Portland, OR of the Pacific Coast League in 1980. He was traded to the San Diego Padres organization in that year and, after a season with Amarillo, TX and a winter playing in Mexico, was assigned to paly with AAA Hawaii in 1981 and 1982. He was called to the major league Padres at the end of 1982.

Rick played parts of three seasons with the Padres, San Francisco Giants and Boston Red Sox. His minor league career spanned from 1977 to 1990 when he hit 259 career home runs and had 949 RBIs. His individual season records during these years also won him numerous awards. 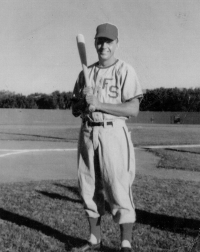 Gordon graduated from high school in 1949 after playing four years of varsity baseball under coach Bill Diemer. The 1948 and 1949 teams won the South Jersey Group IV titles, and in 1949 Gordon was named to the All-South Jersey squad. He also excelled in basketball and football.

The Boston Red Sox offered Gordon a pro contract in 1953, but he decided on staying in college. 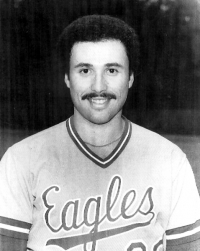 Barry played three years of varsity baseball at Bridgeton HS hitting .436 for his career. Over those three years, he was named to the All-South Jersey Team, All Conference, All-Cumberland County and All-Group IV teams. He then was selected as All-Delaware Valley in 1975 and won the Philadelphia Inquirer Award in 1975 and 1976.

Barry also distinguished himself in football. He was named to the Top 100 Team, All-Cumberland County and was recognized by the Brooks-Irvine Club as an outstanding offensive player.

Barry went on to Valencia College in Orlando, FL where he played in 276 games, breaking school records during his two years there. In his second year at Valencia, he stroked 147 hits, 96 RBIs, 32 doubles and tied for the team home run lead with 8. Barry was voted Florida’s MVP for Division II Junior Colleges transferred to Georgia Southern where he finished out his career posting batting averages of .333 his junior year and .315 as a senior. 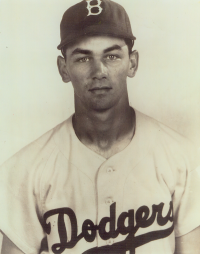 He also played independent ball for RTC Shipyard in 1951 and 1952, where his team won back-to-back Camden County League Championships. Sal then went on to a 3rd league championship with M&S Screw Machine Company in 1953, and again in 1954 with Stanley Motors. He then played for Schilligs Black Horse Farms from 1955 through 1960 where his team posted five Camden County League Championships.

After high school, Sal signed a pro contract and played with the Pittsburg Browns. During that 1949 season, his batting average was .240, had a fielding percentage of .952 and he led the K. O. M. League in assists with 402. Sal, along with teammate Jim McHugh, set the league record for double plays executed. In 1950 he signed with the Brooklyn Dodgers and was assigned to the Hazleton (PA) Dodgers of the North Atlantic League. He played in all 135 games batting .292, a fielding percentage of .920, led the league in assists with 394, led the league in put-outs with 230, and led the league in sacrifices with 19. Sal retired from professional baseball in 1950 to focus on family. 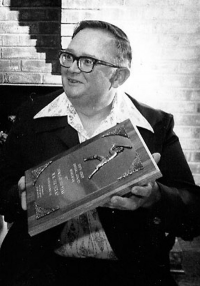 Walt played varsity football at Glassboro HS, graduating in 1957. He moved on to Trenton State College where he played football for four years. After graduation in 1961, he took a teaching job at the newly opened Delsea Regional HS where began a long and distinguished career coaching both football and baseball. During his 37 years at Delsea, Walt was assistant football coach for 17 years, JV baseball coach for 5 years, and head baseball coach for 25 years.

Serad was twice selected as the South Jersey Coach-of-the-Year and in 1994 was elected to the South Jersey Coaches Association Hall-of-Fame. In 1995 he received the Hot Stovers Joe Hartmann Lifetime Achievement Award in baseball. This was followed up by the Carpenter Cup Recognition Award in 1996 for his long service coaching the Tri-Cape Team in the tournament. 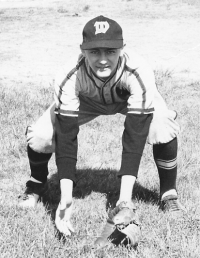 The Woodrow Wilson teams coached by Hall of Famer Al Bass from 1955-1957 were excellent mainly due in large measure to Bill Wagner, who was picked for the All-Camden City Team in 1957.The team won the City Series in 1955 and in 1957 along with the South Jersey Group III championship in 1957. In the fall season, Bill quarterbacked the Wilson football team and was named to the All-City and All-Group III squads as well. Winter found him on the basketball court where Bill was named All-Group III and his team won the Group III title. This demonstrated Bill’s athletic versatility, winning 4 varsity letters in baseball and football, with 3 varsity letters in basketball.

Bill then went on to Trenton State College where his team won the NJ State College Conference crown in each of his 4 years there with a record of 58-11-1. He was named to the First Team All-NJ State College Conference in 1959-60 and 61 and was presented with the Varsity “T” at graduation as the Most Outstanding Senior Athlete. Bill was offered pro contract by the Los Angeles Dodgers, but instead took a teaching and three-sport coaching job at his high school alma mater.

Wagner played semi-pro baseball for teams throughout the Delaware Valley from 1957 through 1980 with many of the areas top teams and often playing for more than one team at a time. He also appeared with the All-Camden City League team in the Bridgeton Invitational Tournament from 1971-1976.

Bill coached baseball, basketball and football at Woodrow Wilson and later at Cherry Hill East HS from 1961-1970. Bill has had a long career coaching baseball and lightweight ‘sprint’ football at The University of Pennsylvania. He can also be found patrolling the outfield for the Hot Stovers team on Sunday mornings. Obviously, he is not yet ready for retirement.