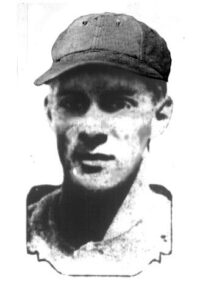 Elwood Bearint is entering the Hall posthumously. He grew up in the Cramer Hill section of Camden where he was considered one of the top baseball players in the area.

He was a crafty left-handed pitcher. Newspaper stories and boxscores indicate he was an above average hitter and excellent defensive outfielder when not pitching. He was signed by Connie Mack’s Philadelphia Athletics in 1926 and played for the Chambersburg (Pa.) Maroons in the Blue Ridge League and York (Pa.) in the New York-Penn League in 1926 where he hit .256 with a 7-6 pitching record.

In 1927, Bearint hit .316 for the Maroons with a 1-4 pitching record. In an exhibition game for the York Roses, he pitched against the St. Louis Cardinals (facing Rogers Hornsby) losing 6-2.

Prior to signing with the A’s, Bearint pitched and hit for the successful Defiance team in Camden. In 1923, Defiance took the Camden City championship with a 33-8 record.

After injuring his elbow in 1927, he returned from the minors to lead Camden to championships in the South Jersey Police League and Strawbridge and Clothier in the Camden City League. For a time, he was a mechanic in the Camden Police garage. He continued to play in the area during the ’30s and ’40s while running a roofing business.
Bearint died in 1954 at 48. Both of his younger brothers, Paul and Chuck, played professional ball and are members of the South Jersey Baseball Hall-of-Fame. 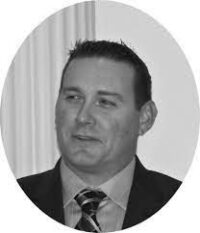 Joe Cruz is a 1995 Overbrook High School (Pine Hill) graduate and an All American in ’96 and ’97 at Camden County College.

At Overbrook, Cruz was an outstanding infielder and hitter batting .430, .419 and .469 respectively in ’93, ’94 and ’95. He had double digits in extra base hits and runs batted in all three years. He was All-Olympic Conference all three years, All-Group IV and All-South Jersey in ’94 and ’95 and All-State in ’95.
In 1995, Cruz was honored by the Hot Stovers with the Billy Carty Memorial Scholarship. He was Most Valuable Player of the North-South New Jersey State All-Star game in ’95.

Cruz transferred to Mount Olive (N.C.) College where he was first team All-Regional MVP and played with the 1998 Team USA in Toronto, Canada. Later he signed with Somerset Patriots of the Atlantic Independent League.

Ted Frett is a Woodrow Wilson graduate. The left-handed pitcher and hitter led the Tigers to the Camden City Series Championship, was his team’s MVP and was selected Camden City Player of the Year.

In 1966, he tossed one no hitter, 2 one hitters, and 2 two hitters. A member of the Cramer Hill Boys Club, he was honored as the winner of the Boys Club of America Medallion emblematic of “”Boy of the Year.””
Frett received a baseball scholarship to Temple University where he is still third all-time in strike outs averaging 9.44 per game and 11th in strike outs with 166. His four-year earned run average was 3.07. He was a First Team All-Star pitcher in NCAA District II in 1969 and caught the eye of professional scouts in May 1968 when he tossed a three hitter against Glassboro State College (now Rowan University) snapping the Profs’ 35-game winning streak.

During the summer, he played in the South Dakota Basin League and named an All Star averaging 10 strike outs per game enroute to a 9-4 record. After graduating from Temple, he played with the Winter Haven (Florida) Class A. League.

When his professional career ended, Frett returned to the area to play for another 10 years in the Philadelphia Penn- Del and other leagues in South Jersey and Philadelphia. He is a life-long educator and retired principal living in West Deptford. Ted is the nephew of South Jersey Baseball Hall of Famer Fred “”General”” Frett, HOF ’91 also from the Cramer Hill section of Camden. 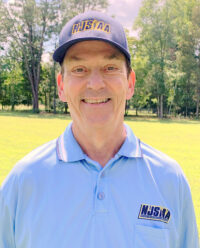 Larry graduated from Pennsauken HS in 1963 where he played baseball for Hall-of-Fame coach Bob Minnick. Larry played summer ball in the Garden State League and in the Delaware Valley League. He was a Del Val All-Star in 1962 and the Garden State League leading hitter in 1963 with a .429 batting average. He went on to Parsons College (Iowa) where pitched and majored in communications, and learned to become a sports announcer after suffering a career ending injury.

Since 1965, Larry has announced hundreds of high school, college and professional baseball, basketball and football games. He is also a 35-year member of the New Jersey Baseball Umpires Association. He has officiated nearly 1,500 independent and high school baseball games including the New Jersey finals and semi-finals and several North/South All-Star games.

As an announcer, Larry has called games for WJJZ (Mount Holly), WKDN and WCAM (Camden), ABC’s Wide World of Sports and the on-air personality for KYW Newsradio (Philadelphia). On August 11, 1981, Larry was behind mike for Westinghouse Broadcasting when Pete Rose’s hit broke Stan Musial’s National League hit record. He became a member of the Philadelphia Sportswriter’s Association in 1968 and has served as the secretary since 1977.

In addition to his affiliation with amateur and pro sports, Larry has been a faculty member at Rowan University for 41 years. 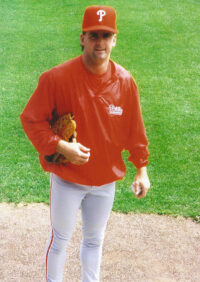 Chuck played summer ball with the Medford American Legion team that made it to the NJ state finals twice in 1984 and 1986. He was awarded a scholarship to the University of Hawaii but turned it down to sign with the Baltimore Orioles Organization.

During his 11-year pro career in the Orioles system, he went 65-69 with 49 saves and a 3.94 ERA. He led the AAA International League in save with 25 in 1995 and was named Pitcher-of-the-Year with the Scranton Red Barons and was presented with the Rolaids Relief Man of the Year Award. Chuck had a short stint with the Phillies in 1995, going 1-0 with an ERA of 1.80. He retired from pro ball after the 1997 season. 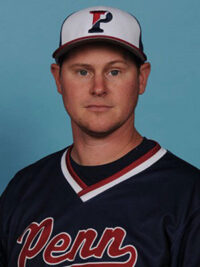 Josh was a 2000 graduate of Gateway HS. The lefthander went 9-2 his senior year when he was All Conference, All-Group and All-South Jersey.

Josh went on to Rowan University he won 37 consecutive games, holds the single-season records for shutouts with four and the career record with eight. Josh also holds the single season record for victories with 13, career with 38 and a career ERA of 2.03. He is tied for the university record of 17 complete games.

He was selected in the 42nd round of the MLB draft by the St. Louis Cardinals and spent two years in professional baseball before retiring.

Steve is a 1999 graduate of Atlantic City HS where he earned four c=varsity letters in baseball. He was All-Group IV, All-Conference and All-South Jersey in 1998 and in 1999.

At the University of Delaware, Steve was team captain and MVP, hitting .333 with 14 home runs and 56 RBIs. He also had a team leading 19 stolen bases. He is 10th among all-time Blue Hens hitters with 31 home runs.

Van Note played 2005-2007 with the Lancaster Barnstormers of the Atlantic League where he led them to the league title. In 2006, the Barnstormers became the first team in league history to win both the first and second half division titles, the division playoff series and the league championship series to go undefeated in championship series play. In that230, 3 year span, Steve had 30 doubles, 6 triples and 15 home runs with 88 RBIs and scored 105 runs. He had a combined batting average of .248.